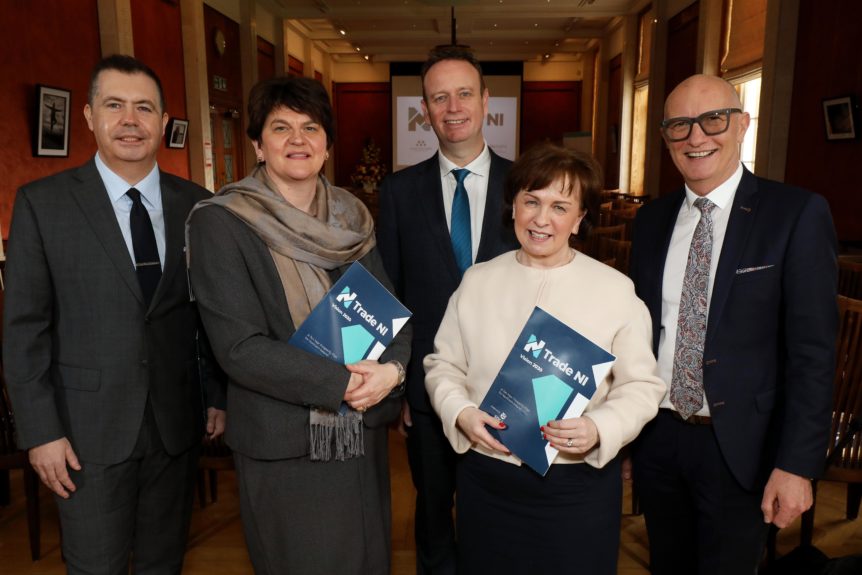 The event was held to highlight the urgent and pressing issues felt by the business community, following the restoration of the Assembly, including the need to boost the Northern Ireland economy.

Addressed by the Chair and Vice Chair of the Economy Committee, Dr Caoimhe Archibald MLA and Sinead McLaughlin MLA, this was the first major policy presentation by the business groups to the newly restored Assembly.

MLAs and business leaders from across Northern Ireland were reminded of the key strategies that are required to rejuvenate the economy and to realise the global investment opportunities that exist for Northern Ireland, as laid out in Trade NI’s Vision 2030 document.

The progressive economic proposals set out the key policy priorities, which have the potential to create 65,000 jobs and to ensure Northern Ireland has a developed economy.

Trade NI, made up of the three largest sectors of industry and the majority of businesses in Northern Ireland, employing around 300,000 people collectively, stressed that the restored Executive must set out to:

The reception at Parliament Buildings followed on from a series of high-level political engagements in September last year, which included the launch of Vision 2030 in Westminster with an audience including the Secretary of State and MPs from across the UK and a reception with the Prime Minister, Boris Johnson.

“Today at the NI Assembly, Trade NI has launched its big, bold, radical ten-year plan for the future of the Northern Ireland economy which we believe can provide the policy direction for the new Executive Programme for Government. We must break the cycle of limited economic growth and allow for potential investment to flow into Northern Ireland.”

“Our Vision 2030 document sets out a plan to reboot the Northern Ireland economy and for the potential to create 65,000 new jobs.”

“Providing an environment where business can thrive, and grow is imperative to the strength of our economy. Reducing the cost of doing business, reforming business rates, investing in our infrastructure, developing skills, increasing our productivity and finding innovative new ways of stimulating investment, revitalising our high streets and creating an economy, which can deliver for working families.”

“The new Executive Programme for Government needs to be more than just a deal between five parties and instead should also include the key partners in the economy, such as business, trade unions, local councils and the voluntary sector. We shouldn’t be seen as just consultees, but as essential partners in the delivery of prosperity for Northern Ireland.”

“We welcome the Vision 2030 document as it represents the basis for engagement between the Executive and the business community on their concerns and priorities following the restoration of the Assembly under ‘New Decade, New Approach’ document.”

“Vision 2030 puts forward range of policies and proposals on key issues which aim to improve productivity and support economic growth.”

“The Committee for the Economy looks forward to engaging with Trade NI on the issues outlined in Vision 2030 and to develop the economic potential of the North.”

“Trade NI is to be commended for developing this suite of economic ideas for the Executive to draw on as it shapes the next Programme for Government. Vision 2030 reflects the business community’s desire to hit the ground running and bring forward a number of ideas immediately.”

“At its meeting last week, the Economy Committee discussed how the regional economy encompasses all of Northern Ireland and any economic policies must be balanced for the whole region. Areas outside of Belfast like the North West also have vibrant retail, manufacturing sectors to sustain and grow.”

“The Economy Committee has highlighted that there are only two years left of this sitting Assembly, and we must use that to make an impact.”